Join our Telegram channel for exclusive photos and full videos.

Revealed! The real reason Alex and Fancy Acholonu broke up, no going back this time
R 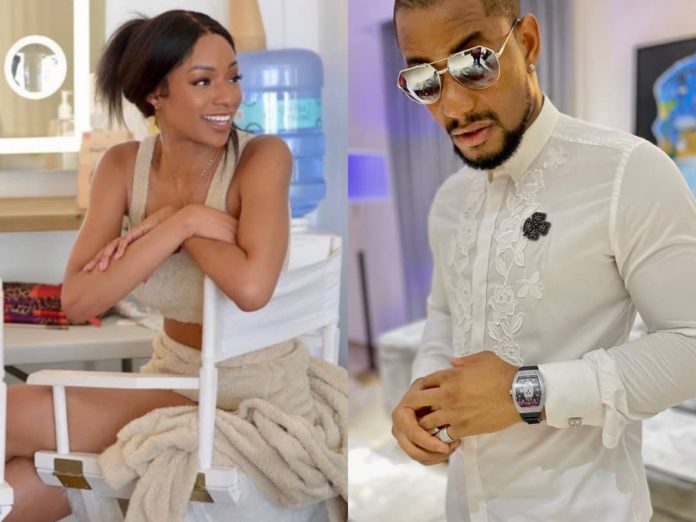 Here is the real reason former couples and internet sensations Alex Ekubo and Fancy Acholonu broke up and there might not be any reconciliation in sight after this.

Nollywood actor, Alex Ekubo had proposed to his long-term girlfriend and lover, Fancy Acholonu in mid-2020 in the United States, but the two had to go their separate ways just a few months before their wedding after Fancy called all plans off.

None of them gave any reasonable explanation for why they called things off but to the surprise of everyone, same Fancy put up an apology post on her Instagram page seeking to be back with Alex.

”Like our shirt says, Nothing makes sense when we’re apart @alexxekubo you still have my heart. I miss you, I love you, and I’m truly sorry for all the hurt & pain you and your family went through with our break up.

My actions in how I handled things was out of my character. I should have controlled my emotions and not been so overreactive. I said too much, I did too much. Please forgive me, I’ve learned my lesson on how to handle situations better.

I haven’t expressed myself properly. I’m not afraid to be vulnerable and say you, your family, & friends still mean the world to me. Losing you has felt like grief. Love heals #FalexxForever”.

All these, however, turned out to be planned entertainment from the two as it seemed at the time as Alex, who reacted to her post with “Apology accepted” unfollowed her and blocked her immediately.

Things have gone really bad since her apology as, the beautiful fair lady now feels used, manipulated and abandoned. This is apparent in her subsequent social media posts following Alex’s reaction.

While many have told her to let go and move on with her life, some blamed her for falling victim to Alex’s revenge mission. Others just want to know why she left in the first place.

In a recent interview with seasoned blogger, Stelladimokokorkus, Fancy answered a series of questions concerning her current predicament.

For a fact, first of all, they dated for five years without any intimacy…read the interview below…

When asked why she broke off her engagement;

Fancy’s response – There are so many reasons I ended it. It’s very personal. I don’t want to embarrass him or myself further. If I say why people will say well how obvious was that and you ignored the red flags. We tried to reconcile, I asked for us to do it privately, and get counselling, he disagreed.

Even his family and friends said privately would be better but he needed the grand gesture apology so he can have the grand wedding he wants again. Not caring the issues were still there.
Everything is about social media for him, and somehow it’s now looking like I want the attention when this is the WORST attention I’ve ever had in my life.

I have a full time job, clients, family businesses etc this was what I wanted to avoid. He ruined every chance of us being back together
by thinking humiliating me will make me still love him.

Now I’m hearing my break-up text has leaked. I sent it to my close people at the time of the break-up. They’re so upset with Alexx and how he treats me that I know they leaked it. We would have married quietly and moved on. Now everyone is in our business so here comes the sabotage because they feel he’s bad for me based on everything they know.

When asked if there’s any chance of a reconciliation, she outrightly said no.

— Stella then asked if it was true that she broke up with him because she found out Alex swung both ways(his sexuality), she insisted that was not the case but mentioned that they dated for five good years without intimacy, read on below…

Fancy’s response -We can’t, it’s too messy, I tried my best. He wanted to get back with me as much as I did. We’ve been at this for one year. But he felt since I broke up with him I should do more of the work. I was fine with that but his methods are cruel and constantly public
His sexuality is not the reason I broke up with him. I’m very open-minded so regardless of what he prefers, love is love for me. I loved him for his personality and heart nothing more. He didn’t want to be with me intimately which was confusing and difficult for me to understand especially for 5 years so it did affect my self-esteem as I kept myself for him and when he would cheat with curvy women he wouldn’t perform with them either so I don’t know, I can’t confirm or deny his sexuality but for me, I loved him despite all and he still found ways to hurt me.

STELLA – Dated five years and no intimacy? Did you confirm he was cheating? caught him or you were told?
Fancy’s response – Yes, that is embarrassingly true. When I met him I didn’t have much experience so it was easy to convince me that his decision was because of religion. But as he would constantly cheat and yes I caught him, it would hurt me because that’s not part of the religious belief he made our celibacy to be. Honestly, this whole thing has been complicated beyond words so it’s unhealthy for me to continue this relationship. I guess I needed this post he begged me to do so that I can see his intention was just to clean up his image.

I am truly sorry I ever posted a break up message, it’s a guilt that has haunted me and he plays on that. I can’t fix the past, but his constant punishment even though my live in their truth statement has truth to it, this embarrassment is not something I deserve.

STELLA -And from the break up text, it looks like you were the one to pay for the wedding both of you were to have..?

FANCY -You have seen it?

STELLA -Yes i have

FANCY – I’m so embarrassed, but everything in that message is true. At that time I was angry and sent it to close peoples and when they saw it they were shocked. It’s bad because with all that I still wanted to go back to him because I loved him. But it being so public has made it impossible to repair this.

STELLA – Do you think too many outsiders are involved in this? Have both families intervened?

FANCY – Way too many, My family does not want him anymore in our family. They know too much. They were In support of a reconciliation if it was private. But his tit for tat was concerning. That August statement not being enough was concerning. He only focused on my reactions; never on his actions.

STELLA – One last thing. Say something to Alexx through this interview. Talk to him through me

FANCY – Honestly I don’t know what to say to him. This has to be the most devastating thing I’ve ever been through, and for it to be so public; I pray we both find healing and peace because it won’t be an easy journey. One breakup statement shouldn’t have led to all this. I wish I never said anything but I am human; I was fed up with good reasons. I pray he doesn’t only focus on people’s reactions but evaluate his actions too. I also pray he learns to be real and more forgiving with his next person and not be so consumed with having the perfect image because it’s draining to keep that up. My mental health can’t tolerate our relationship anymore.
STELLA – Wow. Catch a hug from me Sissy!
Thank you for opening up to me, I pray you both find closure from this.

FANCY – No problem. There’s been reports that he blocked me on the social media; that’s not true, that would be really bad on him. I don’t want people to think that. He just revealed himself

Join our Telegram channel for exclusive photos and full videos.

Actress Bimbo Ademoye vows to deal with colleague, Kunle Remi after what he did to her

Nollywood actress Bimbo Ademoye vows to deal with colleague, Kunle Remi after what he...
Music

Reality Star, Angel Smith Reveals What Her Friend Made Her Do Ahead of Her Birthday

What has changed? Tony Elumelu shares pictures of when he was an NYSC corper

Nigeria multi-millionaire business mogul, Tony Elumelu has shared a throwback picture of when he...

Actress Bimbo Ademoye vows to deal with colleague, Kunle Remi after what he did to her

Nollywood actress Bimbo Ademoye vows to deal with colleague, Kunle Remi after what he...
Music

Reality Star, Angel Smith Reveals What Her Friend Made Her Do Ahead of Her Birthday