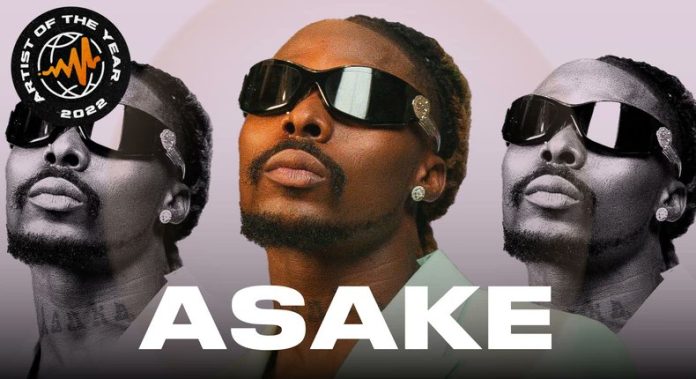 Music streaming platform, Audiomack has named YBNL’s buzzing artist, Asake as its 2022 artist of the year ahead of his numerous counterparts.

Asake, no doubt, gave an energetic run this year across the majority of his musical records, performances and deliveries and is well deserved decorating him artist of the year.

His viral single Omo Ope with his label boss, Olamide from the very beginning exudes so much potential but then every other single released by the Lagos state-born singer was a back-to-back hit.

According to the statement released on Audiomack’s website yesterday, Thursday, Asake’s 30-minute album “Mr Money With The Vibe” released in September raked 330 million streams on the platform alone and debuted at number 66 on the Billboard 200

The statement reads: “In September, Asake released his debut album, Mr Money With The Vibe, a 30-minute bombardment of party-starters which amassed over 330 million streams on Audiomack, making its debut at No. 66 on the Billboard 200.

“Mr Money With The Vibe set the record as the highest-charting debut album from a Nigerian artist ever.

“The Fuji-Amapiano fusion attracted Burna Boy to hop on a remix in March, Re-Upped in April by Audiomack. The cosign from Burna Boy elevated Asake to another plane, and stamped him as Nigeria’s first big breakout of 2022. It was a lofty achievement at the time, but more was to come.

“Asake’s tone centers on using his journey as a case study for overcoming the struggles of young Nigerians. Prior to this year’s breakthrough, he spent many years toiling in the entertainment space.

“By the time he broke into the scene, it seemed like streaming and local radio charts were waiting for him to take his place at the top, which his songs did.

The statement continued,”Asake’s achievements quickly became superfluous, with crooners such as “PBUY,” “Bandana” with Fireboy DML, and then a deal with independent juggernaut EMPIRE, to sing “Terminator”.

“This year, Asake redefined what it means to be a breakout artist. Amidst an explosion of amapiano, and West African music’s continued global rise.

“Asake has conquered cross-cultural fusion like no one else, to the point of putting South African music heavyweights on notice.”

Nigerian singer Teni Makanaki has named her dog after Grammy-award-winner, Burna Boy as she...
Sports

Nigerian singer, Teni displayed her significantly reduced figure as she prides herself on Instagram. The...

Nigerian singer Teni Makanaki has named her dog after Grammy-award-winner, Burna Boy as she...
Sports

Charles Emmanuel Afaha, a former employee of the Maritime Academy of Nigeria, Oron, has...